6 Reasons Why All Muslims Should Come Together For Ashura 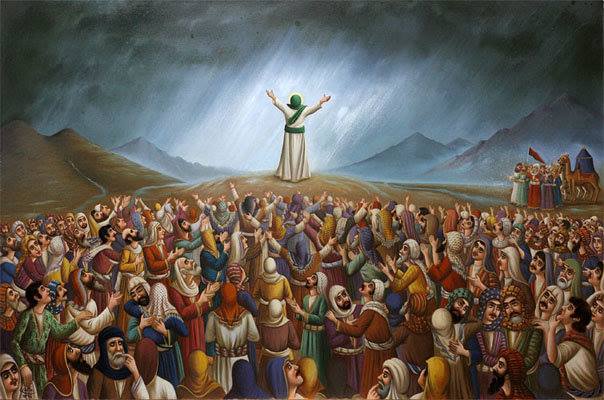 Today is an important but not very widely known occasion in the Islamic calendar called Ashura. Literally it means ‘tenth’ because it is the tenth day of the first month of the Islamic year.

It’s marked by all Muslims to a lesser or greater extent, with different views on why the day is important. Some say it was the day Moses parted the Red Sea and saved the Jewish people. Others recount that it was the day that the ark of Noah finally came to shore. The most visibly noticeable and the one I want to focus on is the story of Husain, the grandson of the Prophet Muhammad.

Yesterday’s horrendous attack in Cricklewood in London was carried out outside a mosque where hundreds possibly thousands of people had gathered to remember the event, which they have been doing for the last ten days, and which will culminate today in the remembrance of Ashura. Such gatherings happen all around the world, with people literally pausing life to remember this occasion.

Here’s the story, very very briefly. Within barely fifty years of the death of the Prophet, a new Caliph called Yazid took power over the already vast and growing Muslim lands. It’s no secret he was a nasty, corrupt, womanising, drunk tyrant that killed indiscriminately. Husain – a key opposition figure publicly fighting this corruption of power in such a short period after the ‘golden’ era of his grandfather – opposed his brutality. Yazid demanded Husain publicly announce his support for Yazid, which of course Husain could not do.

Long story short, this led to a massacre of Husain, his immediate family and close companions including some children so that Yazid could be seen to be crushing his enemies. That took place in Karbala in today’s Iraq, on Ashura. The women and children remained after the battle, and were forced to walk in chains all the way to Damascus where Yazid held court, while crowds jeered and humiliated them, and many children died on the way. That’s the story as it is recounted today. Check historians and more detailed accounts if you want to know more, or unpack the details.

It happened a long time ago, that’s true. And for those who mark this important occasion for Ashura it’s also hugely emotional. That’s why you will see large crowds dressed in black, often wailing loudly, and perhaps the scenes that can look so unfamiliar to our eyes of people beating their chests. This is visceral emotion, and what the participants would call, an expression of love and heartbreak. Participants point to a strong love Prophet Muhammad had for his grandson Husain and that he had repeatedly stated he was a leader of the Muslim ummah.

There are some Muslims who disagree with marking the occasion, especially the emotional aspects of it. But this post is not about their views, but standing in the shoes of those who do mark Ashura this way, listening to their voices. And mostly, what I take away from the occasion.

1. Connecting emotionally to things is powerful

The power of stories, especially ones that connect to our core human emotions of right and wrong, of love, of kindness, humanity and suffering drive us to change ourselves and our societies in ways that dry facts simply can’t. As a storyteller I completely understand why the story of Husain told in these deeply emotional ways is so motivating to people and why when asked about this method, people are so passionate. Emotion makes a difference. And in fact, the softness of a human being’s hearts is a sign of their closeness to the Divine. In the Qur’an it describes the believers as those who “fall on their faces, weeping.” And perhaps one of my favourite Qur’an references which talks about those who don’t believe as being harder in their hearts than rocks, because even rocks fall and water gushes forth from them. So people, cry, weep, let it out. Injustice should trigger these strong feelings. If it doesn’t make you cry, that’s when you start to worry.

A lot of discussion about Ashura says that Husain’s “army” (less than 100 people) meant it was pointless to fight and a suicide mission, and a political solution might have been better. Maybe, maybe not. What I take from it is that to ‘lose’ or take a seemingly crazy decision when you truly believe and your principles mean you just can’t do anything else (he couldn’t concede Yazid was a worthy ruler) can have long term consequences. So 14 centuries later people are still talking about what you need to do to stand up to power. That’s impact. And in the short term it triggered a change in power too.

3. Making a change needs a partnership between men and women, and women’s roles are vital

Ashura’s story is about Husain and his murder. But it’s also the story of his sister Zainab, and how she is his partner, his rock, and leads the entire resistance against the Caliph after Husain’s death. The reason that the story of Ashura is recounted is because of Zainab and the other women. She told everyone, she stood up to Yazid in his palace. She held her head high. There is no Ashura occasion without women. Salute to the sisters!

4. Stand up to bad power / being Muslim is no guarantee that you’re on the right side.

There’s something that gives heart when you need to stand up to bad power – Husain did it, I can do it too. There’s far too much discussion about giving in to ‘Muslim’ leaders no matter how bad they are because it might cause ‘fitna’ (disturbance, corruption). Worse, everyone in this entire event is Muslim on both sides. And this is within living memory of the Prophet Muhammad. So check yourself – you could be on the wrong side.

5. Find the story that motivates you

As I’ve got to know about the events of Ashura, one thing I’ve loved is how those who commemorate the events tell the stories of each person on that day, their background and motivations. They are the instances that bring to life our daily struggles. There’s something for everyone. My favourite is the story of Hur, the commander of Yazid’s army and Husain’s opposing number on the battlefield. He’s the reason the battle happens in Karbala. Yet the night before he has an epiphany that he’s about to massacre some people at the behest of a brutal tyrant. Too late? you might say. What I take from it is that it’s never too late. And one simple decision can totally change your life and take you from the wrong side onto the right one.

It was a long time ago, right? Our stories matter. Whether it’s a hundred years ago (anniversary of the great war coming up, the holocaust), or more than a thousand years ago (ashura) what we know and remember of the past shapes our present and how we relate to it. Bad rulers have always existed. Making difficult choices in the face of massive oppression,or even the micro-oppressions in our own lives will always exist for human beings. Past events give us context, options, inspirations and the emotions to motivate us to change. Never look at a historic event and say it’s not worth remembering it. Instead, ask how can it help me solve the problems I have today.

Peace and blessings and condolences to all those marking Ashura today. In respect I quote the words of Prophet Muhammad “Hassan and Husain are the leaders of the youths of paradise” and “Husain is from me and I am from Husain.”

And perhaps my most favourite interaction from Ashura which is a brief conversation between Husain and his son. The son asks before he knows he will be killed “Are we on the side of truth?” Husain replies “Yes, we are fighting for justice”. His son says “Then I’m ready.”

I feel like in the crazy world we live in now, we need motivations and stories about fighting for justice more than ever. Who’s ready?