What Non-Muslims Say About ‘Ali, The First Successor of Prophet Muhammad 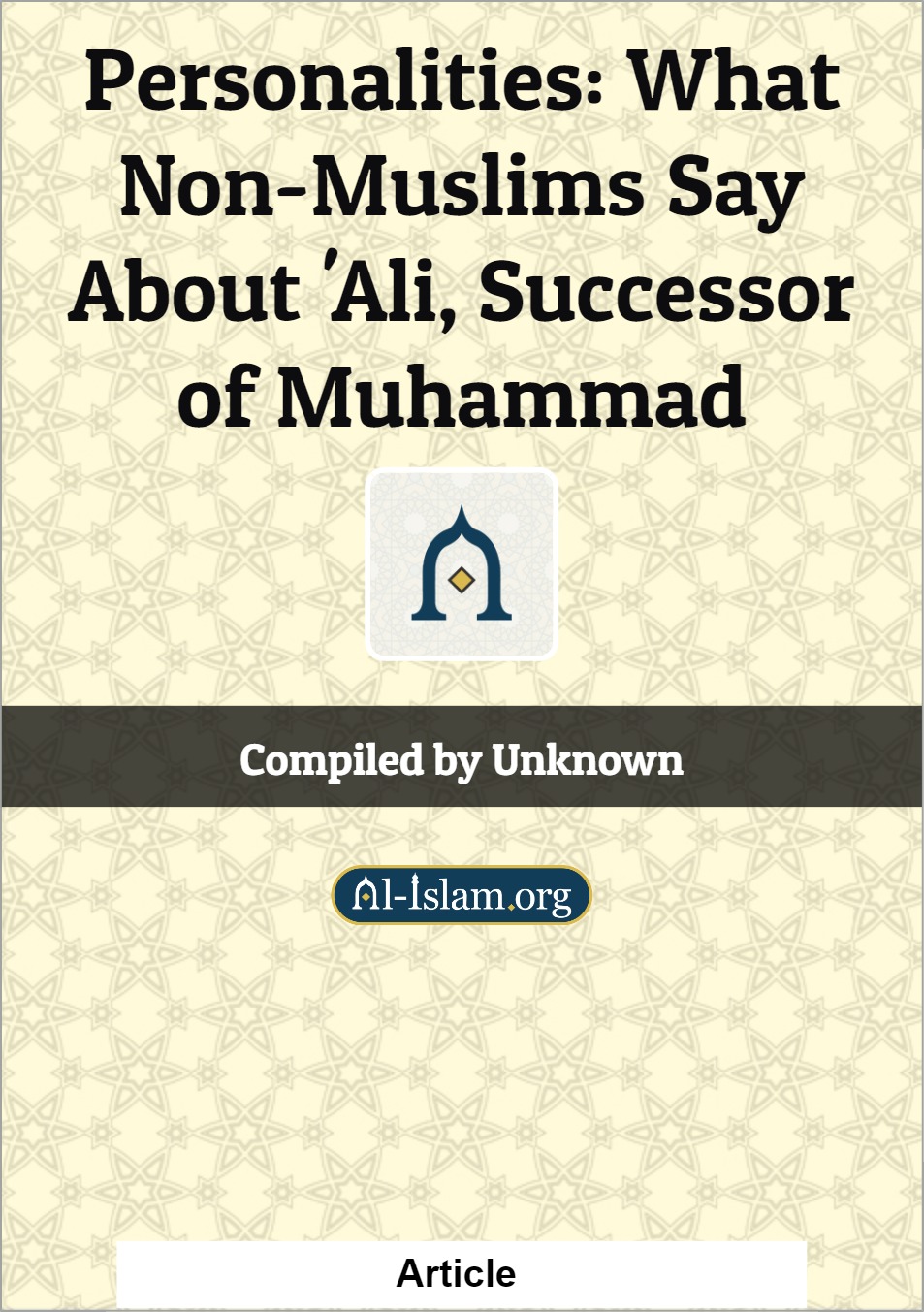 God thus makes clear his signs to you that you may understand (Holy Qur’an 2:242)

Imam ‘Ali bin Abi Talib was the successor to Prophet Muhammad, peace be upon them both. This is a collection of short quotations about him from a wide variety of notables belonging to other faiths, including academics, writers, philosophers, poets, politicians, and activists.

“As for this young Ali, one cannot but like him. A noble-minded creature, as he shows himself, now and always afterwards; full of affection, of fiery daring. Something chivalrous in him; brave as a lion; yet with a grace, a truth and affection worthy of Christian knighthood.” [On Heroes, Hero-Worship, And The Heroic In History, 1841, Lecture 2: The Hero as Prophet. Mahomet: Islam., May 8, 1840)]

Edward Gibbon (1737-1794). Considered the greatest British historian of his time.

“The zeal and virtue of Ali were never outstripped by any recent proselyte. He united the qualifications of a poet, a soldier, and a saint; his wisdom still breathes in a collection of moral and religious sayings; and every antagonist, in the combats of the tongue or of the sword, was subdued by his eloquence and valour. From the first hour of his mission to the last rites of his funeral, the apostle was never forsaken by a generous friend, whom he delighted to name his brother, his vicegerent, and the faithful Aaron of a second Moses.”[The Decline and Fall of the Roman Empire, London, 1911, volume 5, pp. 381-2]

“Valiant in battle, wise in counsel, eloquent in speech, true to his friends, magnanimous to his foes, he became both the paragon of Muslim nobility and chivalry (futuwah) and the Solomon of Arabic tradition, around whose name poems, proverbs, sermonettes and anecdotes innumerable have clustered.” [History of the Arabs, London, 1964, p. 183]

Sir William Muir (1819 – 1905) Scottish scholar and statesman. Held the post of Foreign Secretary to the Indian government as well as Lieutenant Governor of the Northwestern Provinces.

“Endowed with a clear intellect, warm in affection, and confiding in friendship, he was from the boyhood devoted heart and soul to the Prophet. Simple, quiet, and unambitious, when in after days he obtained the rule of half of the Moslem world, it was rather thrust upon him than sought.”[The Life of Mahomet, London, 1877, p. 250]

“He had a contempt of the world, its glory and pomp, he feared God much, gave many alms, was just in all his actions, humble and affable; of an exceeding quick wit and of an ingenuity that was not common, he was exceedingly learned, not in those sciences that terminate in speculations but those which extend to practice.” [An Account of the Rise and Progress of Mahometanism, 1705, p. 83]

“He had been wise in counsel and brave in battle, true to his friends and magnanimous to his foes. He was to be for ever the paragon of Muslim nobility and chivalry.”[Rulers of Mecca, London, 1951, p. 49]

“In face of the fake Umayyad claim to legitimate sovereignty in Islam as God’s Vicegerents on earth, and in view of Umayyad treachery, arbitrary and divisive government, and vindictive retribution, they came to appreciate his honesty, his unbending devotion to the reign of Islam, his deep personal loyalties, his equal treatment of all his supporters, and his generosity in forgiving his defeated enemies.” [The succession to Muhammad: a study of the early caliphate, Cambridge, 1997, pp. 309-310]

“As the chief of the family of Hashem and as the cousin and son-in-law of him whom the Arabians respected …, it is apparently wonderful that Ali was not raised to the Caliphate immediately on the death of Mohammad. To the advantages of his birth and marriage was added the friendship of the Prophet. The son of Abu Talib was one of the first converts to Islamism and Mohammad’s favourite appellation of his was the Aaron of a second Moses. His talents as an orator, and his intrepidity as a warrior, were grateful to a nation in whose judgement courage was virtue and eloquence was wisdom.”[An history of Muhammedanism, London, 1818, p. 89]

Simon Ockley (1678-1720) Professor of Arabic at the University of Cambridge.

“One thing particularly deserving to be noticed is that his mother was delivered of him at Mecca, in the very temple itself; which never happened to any one else.”[History of the Saracens, London, 1894, p. 331]

“With him perished the truest hearted and best Moslem of whom Mohammadan history had preserved the remembrance.”[Islam Under the Arabs, 1876, p. 120]